The Sioux are a proud people with a rich heritage. They were the masters of the North American plains and prairies, feared by other tribes from the great lakes to the Rockies.

Migrating west from Minnesota, the Sioux became nomads of the plains, taking advantage of horses that were originally brought to the Americas by the Spanish in the 1500s. Following the buffalo, they lived in teepees to allow them quick mobility.

Though the Sioux were known as great warriors, the family was considered the center of Sioux life. Children were called “Wakanisha” which meant sacred and were the center of attention. While monogamy was most often practiced, Indian men were allowed to take on more than one wife. However, infidelity was punished by disfigurement.

The roles of men and women were clearly defined with the men expected to provide for and defend the family. Hunting was taken very seriously and infraction of the hunting rules could lead to the destruction of a man’s teepee or other property. Women were the matriarchs, ruling the family and domestic lives of the band.

The Sioux were a deeply spiritual people, believing in one all-pervasive god, Wakan Tanka, or the Great Mystery. Religious visions were cultivated and the people communed with the spirit world through music and dance.
War and battles were another underlying principle of the Sioux people because, through it, men gained prestige, and their prestige was reflected in the family honor. 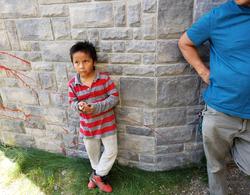 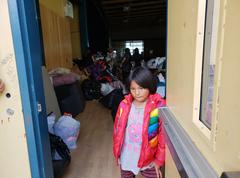 There was a time when the land was sacred, and the ancient ones were as one with it. A time when only the children of the Great Spirit were here to light their fires in these places with no boundaries…
In that time, when there were only simple ways, I saw with my heart the conflicts to come, and whether it was to be for good or bad, what was certain was that there would be change.
— unknown Author

Our Reservations lack the opportunity and provisions needed to sustain a healthy Family. Suicide, Addiction, abuse in all forms, depression and loss of Identity contributes to separation of the family. We need change. we need our families whole

We have a simple mission: to give the first nations people what they need. We take so much for granted, a pillow, Towel, Blanket, Hygeine needs, a pan to cook in, drinkable water, food, shoes, shelter, a jacket, warm clothes. and peace of mind. These are the things we supply to the people directly in the community. we hold spiritual meetings of encouragement, play music, sing and dance as our people love to do. We honor our Creator and we believe in no religion, just a personnel spiritual walk. We have helped and have seen many Natives start a new life and restoration with their families.

The Dakota Sioux, also called the Santee Sioux, originally migrated northeast into Ohio and Minnesota. The name “Santee” comes from camping for long periods in a place where they collected stone for making knives  Woodland people, they thrived on hunting, fishing and some farming. It was from the Dakota, that the Lakota stemmed, moving further west into the great plains.

There are four bands in the Dakota tribe, who primarily live in South Dakota, Minnesota, Nebraska, and North Dakota, including:

In the 19th century, the railroads hired hunters to exterminate the buffalo herds, in order to force the tribes onto reservations. As the buffalo quickly came almost extinct, both the Dakota and Lakota were forced to accept white-defined reservations in exchange for the rest of their lands. Domestic cattle and corn were given to the Sioux in exchange for buffalo, making the Sioux dependent upon the government for food and payments guaranteed by the treaty.

In 1862, after a failed crop the year before and a winter starvation, the federal payment was late to arrive. The local traders would not issue any more credit to the Dakota and the local federal agent told the Dakota that they were free to eat grass. As a result on August 17, 1862, the Sioux Uprising began when a few Dakota men attacked a white farmer, igniting further attacks on white settlements along the Minnesota River. The US Army put the revolt down, then later tried and condemned 303 Dakota for war crimes. President Abraham Lincoln remanded the death sentence of 285 of the warriors, signing off on the execution of 38 Dakota men by hanging on December 29, 1862, in Mankato, Minnesota, the largest mass execution in US history.